Quotes and notes from Software Engineering at Google

Hyrum’s Law: with a sufficient number of users of an API, it does not matter what you promise in the contract: all observable behaviors of your system will be depended on by somebody. 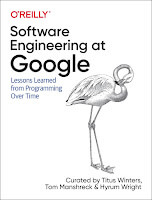 I really enjoyed and learned a lot from this book.  I noted that, as is the case with many O'Reilly books about best practices at Google, different people will find various chapters more/less interesting and pertinent to them.

Below are the excerpts that I found most pertinent.

“If you liked it, you should have put a CI test on it,” which we call “The Beyoncé Rule.”

Jevons Paradox: consumption of a resource may increase as a response to greater efficiency in its use.

•    Design for the user who will have the most difficulty using your product. 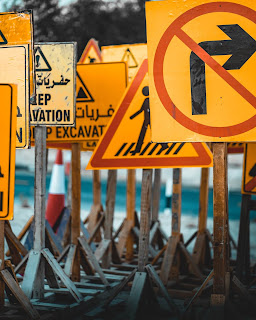 When a major customer issue is escalated to the development team, it is natural for the team to go into high anxiety mode, over-responding to the wrong things and under-responding to the right things. Below are my key recommendations based on my experiences (based on my update to the GitLab Handbook on this subject): Talk to your development leaders and product management counterparts before making commitments to customers in real-time.   The impact of what the customer is requesting may have an impact on other commitments that you may or may not be aware of. Don't assume your customers understand your internal processes for making changes.   They want to know when it will be available for them to use. Don't assume that customers will communicate in ways that are compatible with your team's norms.  They may engage in written communication (Email, instant messenger, support tickets, etc.) differently than you do regarding the level of detail and timeliness of responding.  T 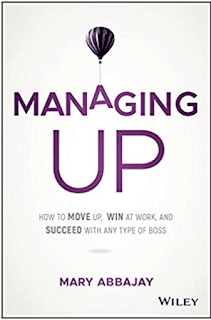 Notes on Managing Up

Notes and excerpts from Managing Up How to Move up, Win at Work, and Succeed with Any Type of Boss This is a great book that I confirmed much of what I already knew but presented it in a very organized, engaging, and actionable way.  My notes and chosen excerpts are below, but they don't do it justice.  If these resonate with you, buy the book! Overview Managing up is not about following your boss blindly. It's about making strategic choices to obtain the best results for you, your boss, and the organization. You can't change your boss. All you can do is change your reaction to your boss. If your boss doesn't know how to manage people, then you have to learn to manage her. Excelling at managing up means keeping your ego in check. You want to treat your boss how he or she likes to be treated, not necessarily how you like to be treated. This is about your boss, not you. Be aware of the pet peeves and hot buttons of your boss. Introverted bosses Be ok with silence.  Try co

How GitLab Makes Agile Shine With Developers Spread Across 65 Countries

This was a great discussion with Agile New England on May 5.  The slides are attached, however most of the content was live presentations of the GitLab handbook and viewing issues/merge requests for the GitLab product itself to show examples. Topics that were discussed What is the GitLab product? Who and where is GitLab? Company values Product development flow Lifecycle of a code change Development processes Incentivizing changes from "others   Video     Slides 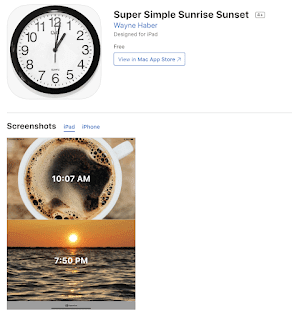 My first (flutter) mobile app accepted on the Apple store

Lessons learned to get my first mobile application approved by Apple: Change the default string for the reason location is being requested. Don't submit screenshots with the default "Debug" overlay that Flutter provides. 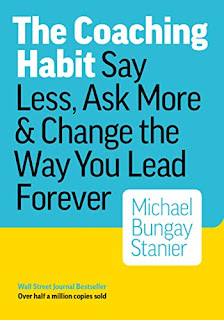 My notes on The Coaching Habit: Say Less, Ask More & Change the Way You Lead Forever

I found this book on target, succinct, and immediately actionable.  My notes The primary questions to ask when coaching: What’s on your mind? (Intentionally open-ended) And what else? (Keeps the mentee thinking about influencing factors past the initial description) What’s the real challenge here for you? (Avoid mentor bias) What do you want? (Focus on the mentee’s goals) How can I help? (Also avoids mentor bias) What was most useful to you?  (Reflection helps learning and retention) On saying Yes If you are saying yes to this, what are you saying no to? A yes is nothing without the No that gives it boundaries and form. Say yes slowly in order to be curious before committing.  It is easier to get into things than to get out of things. Fascinating quotes from the book What people think of as the moment of discovery is really the discovery of the question - Jonas Salk The single biggest problem with communication is the illusion that it has taken place. - George Bernard Shaw Plans are us 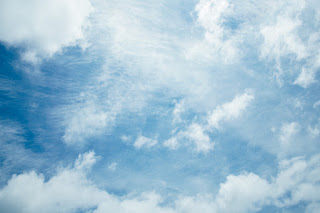 Since I launched my shadow program, more than five employees have taken me up on shadowing all of my meetings for a week. One my shadows wrote a blog based on what they learned.   Here was the TL;DR on what they learned: I totally recommend taking one week to enjoy Wayne's adventures. It is an enriching and humbling opportunity to connect with colleagues that you might not come across if you are on another team. As mentioned before, we impact each other more than we might usually think.